This brief trip in February 2018 was my first time in Kochi and indeed Kerala, but from what I saw it seems locals call it ‘God’s own country’ for a good reason. My Kerala state map is here.

Two of those days were spent in Fort, the historical centre of the port of Kochi (formerly known as Cochin). My Kochi city map is here. For a tourist, Fort is the best area to stay and hang out in. I can recommend this nice, mid-range place on the waterfront.

The rooms are cheap and basic but good value at 4000Rs a night. They are very clean and have air-con and a fan and a decent shower, which is really all I want in a room. The communal veranda looks out over a pretty central area with lots of trees and greenery.

The best thing about the hotel is the restaurant which has a good reputation for local cuisine. On my first night they kindly kept the kitchen open a short while longer to feed me as I arrived quite late at 11pm. Of the two times I ate the local dish Beef Fry, the best was here (B+).

Another nice thing about the restaurant is that it overlooks one of the backwaters with the port on the opposite bank. The morning meal is complimentary and you get a choice between Western or Keralan breakfasts.

A typical example of the latter is Appam and Stew (pictured). The ‘stew’ is made from coconut milk and flavoured with cinnamon sticks and star anise.

Maria is a very nice Catholic lady who has achieved some fame as a cookery teacher with an occasional appearance on TV. She and her chatty husband George made our group very welcome.

Althogether ten of us managed to cram into her small dining room area. There was just one stove so this was more of a demonstration rather than a class where we made our own dishes. It was very interesting though and I did manage to get on the pots and pans for a couple of dishes.

I already knew that Southern Indian cuisine features coconut in many forms, e.g. fresh, desiccated, milk or oil. However I didn’t know that mustard seed, as opposed to cumin seed in the north, is what is initially used to flavour the cooking oil down here.

I also learned that you don’t necessarily double the spices if you’re cooking for twice the number of people. Turmeric in particular should be used sparingly as too much can adversely flavour the dish when really it’s mainly added for colour. Fresh turmeric is only used for drinking and the powder is for cooking, as well as disinfecting wounds. Soaking cauliflower in turmeric and water will cleanse it of pesticides, and any remaining pests.

We made five dishes in all. Most people’s favourites where the Mutter Panner and the Beetroot Pachadi, but the Cabbage Thoran and the Mezhukuperati Lentils were very good too, as was the token Northern dish, a Chicken Masala. 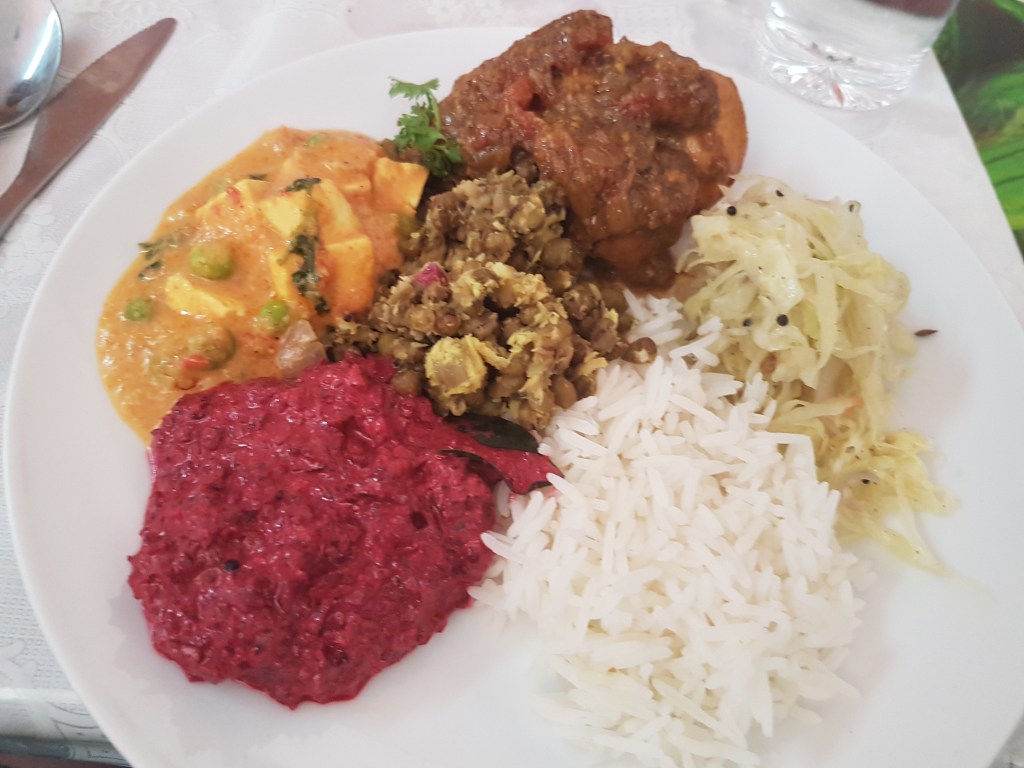 After class, I was spitting nails in the heat so I went for a beer at Koder House www.koderhouse.com. It’s now a boutique hotel but was once the family home of a very well-to-do Jewish family. Jewish people had a big influence on Kochi, more of which in the next post.

Around the block the Old Harbour Hotel www.oldharbourhotel.com also looks very nice, if a bit out of my price range.

If you see this distinctive three-wheeler parked up around Jawahar Park and touting for business, book him for the day, he’s a real character.

This is the posh restaurant of Malabar House www.malabarhouse.com a beautiful boutique hotel.

The restaurant philosophy seems to be about blending local cuisine with Mediterranean influences. The menu is studded with dishes from visiting chefs from Spain and Switzerland who have interpreted the local ingredients in different ways.

I went for the ‘Flavours of Kerala’ menu for 2700Rs. After a tasteless amuse bouche (C) I began properly with Koonthal, a squid thoran in a pappadam nest (B).

Next, the entirely edible but rather flavourless (C) Ivy Gourd & Aubergine Theeyal; vegetables in a roasted coconut sauce with coriander and Upma porridge (B).

The following Pollichathu of Tiger Prawns; large shrimp steamed in a banana leaf with a spice mix, was my favourite (B+). This was served with an Appam and a tiny Shrimp Samosa (both C).

After this Kappayum Meenum, a Travancore fish curry with chunks of seer fish (Spanish mackerel) in a reduced gravy of coconut milk and turmeric with tempered tapioca (B).

To finish Wattalappam, a baked Sri Lankan dessert with caramelised layers of fruit with a sorbet of ‘tender’ (young?) coconut on the side (both B).

I forewent the final glass of Masala Chai in favour of finishing the rather good bottle of Sula Riesling (B+) which is to date the best Indian wine I’ve had. When I lived in Delhi back in 2012/2013 I developed a taste for Sula fizz, and their Shiraz, but had never tried the Riesling which was a revelation. It’s nice to know that there are nice wines to be had in India.

Further research is required but another acquaintance also recommended the Grover wine brand.

If I came again I’d have the Malabar House Seafood Platter which is their signature dish, or maybe one of their thalis for lunch. And I’d book a table in front of the stage in the courtyard so you can enjoy the live Carnatic music. Video here.

That was the food post, now for a stroll…